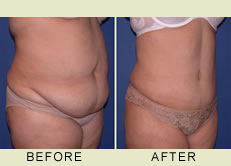 A preliminary study revealed that many abdominoplasty (“tummy tuck“) patients may experience significant and long-term weight loss, especially those who were obese or overweight before their procedure.  The study was detailed by the American Society of Plastic Surgeons (ASPS), the world’s largest organization of board-certified plastic surgeons, in the February issue of its official medical journal Plastic and Reconstructive Surgery®.

Also known as a “tummy tuck,” an abdominoplasty is a plastic surgery procedure designed to remove excess abdominal fat and skin.  Researchers in the study assessed the weight loss, both short and long term, in 20 women one year after their abdominoplasty procedures and discovered a high rate of sustained weight loss.  Most women sustained a weight loss greater than the tissue removed.

What is enabling these patients to keep the weight off, something traditional and popular diets have failed to do?   Researchers suggested that the long-term weight loss might be related to an increased satiety or feeling full after eating, and discussed possible “neuroendocrine mechanisms” that may facilitate weight reduction after patients underwent such tummy tucks/abdominoplasties.  The study hypothesized that eliminating abdominal fat cells may lead to reduced levels of hormones affecting appetite, however, subsequent research is needed to confirm this hypothesis.  75% of the abdominoplasty patients in the study felt an increased satiety, either after consuming food or throughout the day.

Unlike gastric bypass and other bariatric surgical procedures which are limited to patients with morbid obesity, abdominoplasty is an option open to a wider range of people determined to reduce their weight and decrease the size of their abdomen.

Whether or not there are significant neuroendocrine mechanisms at play, Board Certified Seattle plastic surgeon Dr. Shahram Salemy is told by countless tummy tuck patients that they feel  better about their bodies after having removed their excess abdominal fat and skin,  and when they feel better, they are more confident about exercising and leading a more active lifestyle.  As opposed to when they exercised with their pre-Abdominoplasty bodies, they are now able to see actual results and body definition after working out.  Enjoying their post-Abdominoplasty body has contributed to their confidence, and their ability to work out and see results.  Dr. Salemy also stresses that the primary reason for having an abdominoplasty is still cosmetic, and patients who are fit and close to their ideal or goal weight usually have a much better and more durable aesthetic result.

See Before and After photos of some of our Seattle abdominoplasty / tummy tuck patients.