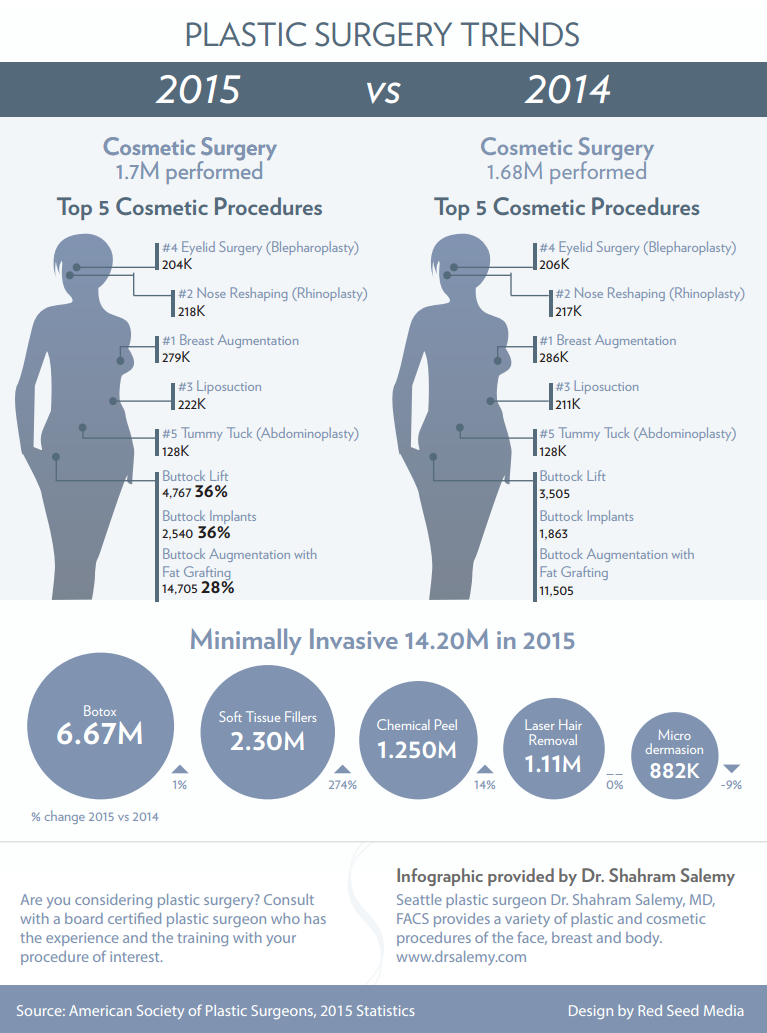 It is a trend that is undeniable. The popularity of plastic surgery continues to increase. In 2015, more than 15.9 million surgical and minimally invasive cosmetic procedures were performed, according to the annual report released by the American Society of Plastic Surgeons. That is a whopping 115 percent increase since 2000 and an impressive 2 percent increase since 2014.

The steady rise in the demand for plastic surgery is no doubt linked at least in part to the public’s growing acceptance for cosmetic procedures. While the topic of plastic surgery and speculations about who was having it were once discussed in whispers, such subterfuge is a thing of the past today. Some people still prefer to handle it discretely, but attitudes have definitely changed. Plastic surgery is now fairly common and widely accepted. People from all walks of life can be as open as they choose to be about undergoing cosmetic procedures.

A Shift in Focus
Four of 2015’s top five surgical procedures were also among the top five in 2014 and 2000: breast augmentation, liposuction, nose reshaping and eyelid surgery. However, facelifts slipped off the list to make room for tummy tucks. This change reflects a shift in focus. With a continually expanding array of options to consider, people are selecting cosmetic treatments that address the areas that they personally feel uncomfortable with, and as a result, the list of areas of the body receiving the attention of plastic surgeons continues to grow more diverse.

Lifts Soar
The explosive popularity of lifts further showcases the diversity of body parts people wish to improve and offers ample proof of the desire to fight gravity’s effects. Nearly 100,000 breast lifts and close to 55,000 neck lifts were performed in 2015. The demand for upper arm lifts has grown nearly 5000 percent in the past 15 years, and the number of lower body lifts soared by nearly 4000 percent in the same period. Attention to areas below the belt also increased in 2015 with the number of butt lifts and butt implant procedures both increasing by 36 percent since 2014. Butt augmentation with fat grafting was not far behind; it rose by nearly 30 percent. In fact, the fastest growing procedures in 2015 were procedures that enhance the buttocks area, and the trend shows no signs of slowing.

Lip Service
The demand for lip enhancements was also strong in 2015. There has been steady growth in the number of lip augmentation procedures using injectable fillers, and the number of lip implant procedures climbed 5 percent in 2015, which works out to an increase of nearly 50 percent since 2000. Why are lip implants now the second fastest growing facial procedure? Technological improvements may be part of the reason. New technologies mean that today’s implants are more stable and more pliable than older devices. New implants require just two small incisions, and patients generally need very little recovery time after the procedure.

A Youthful Inclination
It has been widely recognized that many cosmetic procedures are designed to create a more youthful appearance, so it may be somewhat surprising to discover that the audience for these treatments is getting younger. Plastic surgeons are reporting a surge in patients in their 30s opting for preventative injections of botulinum toxin to ward off wrinkles and other signs of aging. Over time, the movement of facial muscles leads to the formation of dynamic wrinkles like crow’s feet and forehead lines. Injections of botulinum toxin temporarily paralyze these muscles. If the overlying skin is already showing signs of wrinkles and lines, relaxing the muscles beneath it will soften them. When wrinkles have yet to form, relaxing the muscles halts the movements that would have triggered the aging lines, preventing the progression or delaying the formation of wrinkles.

Looking Ahead
What will 2016 bring? There are several potential trends worth watching. Experts say that while breast lifts and augmentations will remain popular, the strong focus on bottoms is likely to continue, and that means that butt lifts, lower body lifts and butt implants will be in high demand among those seeking cosmetic surgery. Plastic surgeons also should expect the number of men seeking their services to continue to increase. The strong numbers for microdermabrasion, tattoo removal and nonsurgical skin tightening suggest that a focus on the quality of the skin itself will drive patients’ desires for treatments that improve the look of the skin. The use of fat grafting to shape and refine areas like the face, breasts and butt is also expected to flourish in 2016.

Fully aware of the positive impact that cosmetic procedures can have on an individual’s confidence and self-esteem, Dr. Shahram Salemy, a Seattle-area Board-Certified Plastic Surgeon who is committed to providing his patients a positive plastic surgery experience and is delighted to see a wider range of people enjoying the benefits that cosmetic treatments can deliver.